The Serengeti National Park covers approximately 14,500 km2. This represents about half of Languedoc-Roussillon and a little more than the Île de France region. It was partially protected in the 1920s then set aside in 1950. In 1951, the Serengeti was placed in a National Park, it included the highlands of Ngorongoro detached in 1959. The Serengeti is the second largest reserve in Tanzania and extends to Kenya to the north with the Maasai Mara. It is limited to the west by Lake Victoria. The altitude varies from 920 to 1850 meters, the Seronera (the center) being located at 1530 meters.

The name of this park comes from the name Maasai which means "endless plain". This name describes well, for those who have visited, all the emotion one feels at the immensity and beauty of this wild Africa.

The diversity of the landscape: rivers, endless plains, lakes, hills or rocky mounds (the very characteristic Kopjes of the Serengeti), gives an incomparably magnificent image.

The Great Migration is arguably the most impressive and unique phenomenon in the world that has contributed to the reputation of the Serengeti. Indeed, each year about 1.3 million wildebeest, 250,000 Thompson's gazelles and 200,000 zebras (followed by their predators) undertake a long journey (about 1,000 km) to follow the rains north to the green plains. of the Maasai Mara in Kenya which will provide them with the water and green grass necessary for their survival. They will return a few months later to the plains of the Serengeti.

The combination of volcanic soils and the ecological impact of migration results in one of the most productive ecosystems on earth, supporting the largest number of ungulates and the highest concentration of top predators in the world.

The ecosystem includes two million wildebeest, 900,000 Thompson's gazelles and 300,000 zebras which are the dominant herds. The other herbivores are: 7,000 elands, 27,000 damalisques, 18,000 hartebeest, 70,000 buffaloes, 4,000 giraffes, 15,000 warthogs, 3,000 cobs, 2,700 elephants, 500 hippos, 200 black rhinos, ten species of antelopes and ten species of primates. Top predators include 4,000 lions, 1,000 leopards, 225 cheetahs, 3,500 spotted hyenas and 300 wild dogs. There are over 500 species of birds that are permanently or seasonally present in the Park, of which five species are endemic to Tanzania. The Park has the largest population of ostriches in Tanzania and possibly Africa, making this population of global significance. 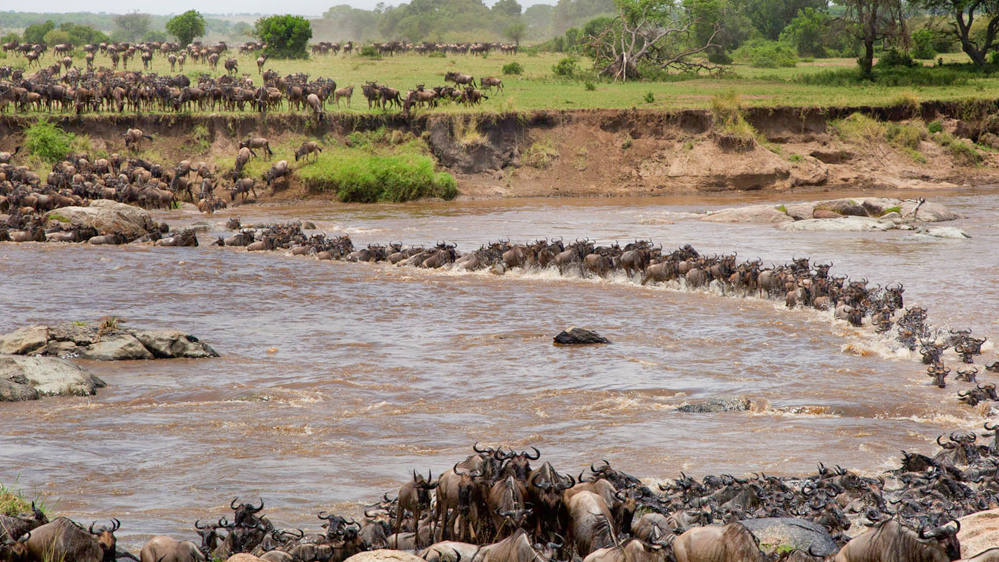